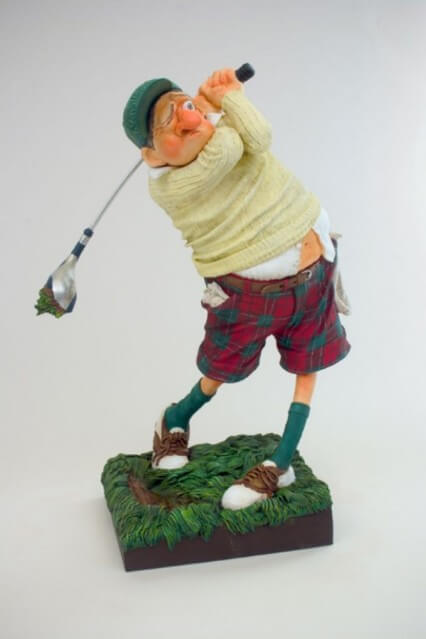 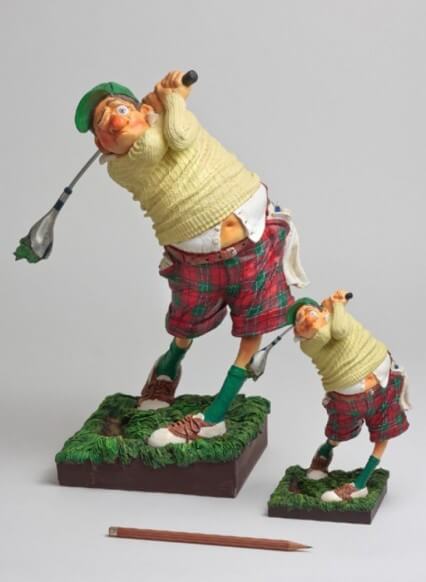 Fore The hole was far away, Mauro Rugolin needed to hit hard, but with accuracy. He knew he could do it; several times, he had seen Tiger do the same. That afternoon, a crowd had come to see him and they were all hoping to witness his magnificent drive.

He spread his legs exactly how one should. In perfect synchronization, he initiated a rotation of his shoulders and waste while stabilizing his right knee just a little. At first, he glanced an instant at his distant objective while drawing a small smile of self-importance.

He continued his impeccable movement while concentrating on the little white ball. He remained immobile several seconds and with all his force…gave a tremendous whack lifting an enormous clod of earth. The little ball was never found, but the clod of earth finished its arc on the head of the referee, who had to be hospitalized because of a huge bruise above his left eye.

The artist Guillermo Forchino (1952) was born in Rosario Argentina and lives in Paris France with his wife Monica. His artworks find acclaim worldwide through a collaboration with VMM in the Netherlands with whom Mr. Forchino signed an exclusive agreement to have replicas of his collection created in the same great detail as the original works, in numbered & limited editions, under his personal supervision. This collection was named “The Comic Art of Guillermo Forchino”. With the development of the replicas of Guillermo’s art, his designs have become available to art lovers in many countries. On these pages you will find pictures of all his creations, which can now be found in various shops in many countries worldwide. Twice every year a few new designs are unveiled, always surprising the many fans that collect the Forchino artworks. We invite you to take a look! The artwork of Guillermo Forchino is reproduced in various sizes. Some in the same size as the original, some at 75% others at 50%. If you cannot find a specific design in your area, we invite you to contact us. Maybe we can help.

Be the first to review “Fore The Golfer Large” Cancel reply