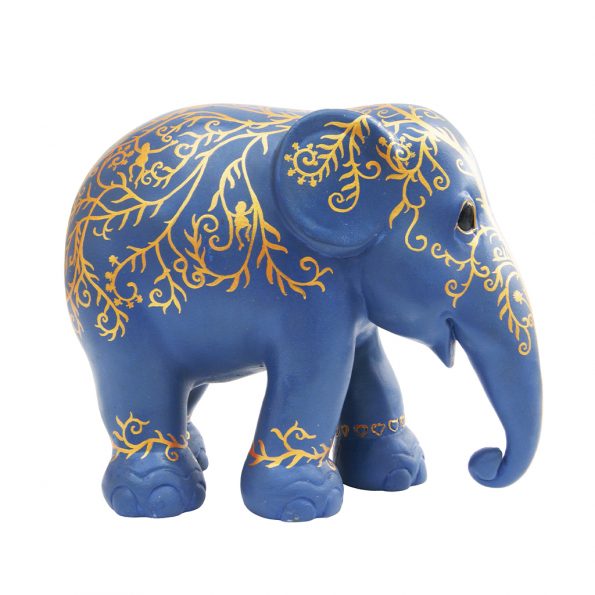 Inspiration: The design for Eko is influenced by Indian patterns in a palette of blue and golds; a vine grown from the bottom of the trunk up and over the elephants back in a living canopy like an exotic blanket. Swinging amid the branches are orang-oetans to reflect the sponsoring charity The orangutan Foundation.

All Elephant Parade replicas are carefully handcrafted in Chiang Mai, Thailand. Due to its handcrafted nature each piece is unique and might vary slightly in design.

Elephant Parade is a social enterprise and runs the world’s largest art exhibition of decorated elephant statues. Created by artists and celebrities. Thus Each Elephant Parade statue is a unique art piece. International cities always exhibit the life-size elephants and raise awareness for the need of elephant conservation.

2006 was the first elephant parade event by Marc Spits and his son Mike. The inspiration came from Marc Spits’ visit (while logging in Myanmar) to the elephant hospital in Thailand, which constructs prosthetic legs for elephants that encounter landmines. There he saw Mosha, a baby elephant who lost her foot when only seven months old. Thus the idea of the event came to existence.

Be the first to review “EKO 20 cm” Cancel reply